I admit it. I watched the Miss America pageant. I also admit that I started another article titled, “Bedazzle Your Brand,” but I decided to punt on that one.

I found a great PR lesson in Miss New York’s win. She has beauty, talent (which was certainly questionable with a few of the other contestants) and the brains and poise required to answer the formidable “judge’s question.” But wait, she didn’t actually give a straight answer to the judge’s question, did she?

This was the question: “TV Host Julie Chen revealed that when she was starting out, for career reasons, she had plastic surgery to make her eyes appear less Asian. What message does this send to young women?”

This was Nina Davuluri’s answer: “Unfortunately, I don’t agree with plastic surgery, however I can understand that from a standpoint. But more importantly, I’ve always viewed Miss America as the girl next door. And the girl next door is evolving as the diversity in America evolves She’s not who she was ten years ago and she’s not gonna be the same person come ten years down the road. So I wouldn’t want to change someone’s looks or appearance. But definitely be confident in who you are.”

Did it matter that she didn’t directly answer the question? Obviously, not. Here’s the thing – she knew that she controlled the message. I attended a Marketing/PR conference last week and during a session on media relations, the speaker’s handout had the following sentence: “No matter the actual questions, you are telling the story you have.” That’s exactly what Miss New York did. She told the story she had. Her story was about ethnic diversity and how “the girl next door” (a.k.a. Miss America) is evolving through the years. Basically, she described herself in a very prescient answer.

Don’t think for a minute that she hadn’t rehearsed some version of that answer many, many times. Which brings up another point from last week’s speaker: “Never go to an interview unprepared.”  Miss New York was definitely prepared. She spoke quickly and confidently (she didn’t get cut off like Miss Florida) and delivered her message.

That’s what all brands need to do when communicating with the media – deliver their message. The next time you have a media interview, remember to tell your story and to be prepared. The best part? You won’t even need butt glue or hairspray. 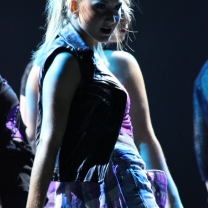